Our first production as a fledgling production company was a one minute short. The brief was simply the title 'Avoidng the Unexpected' and no more than one minute long.

After careful consideration we felt that avoiding the unexpected was practically impossible, after all the unexpected is simply that, and is generally unavoidable.

With this in mnd we decided to do a film based on the all too real battle that exists for those with mental health problems who struggle every day to cope with simple tasks such as shopping, interacting with people, and the fear of unexpected noises or situations.

The film attempts to portray the inner turmoil that these people feel when faced with the everyday situations that the rest of us take for granted, such as leaving the safety of their home. 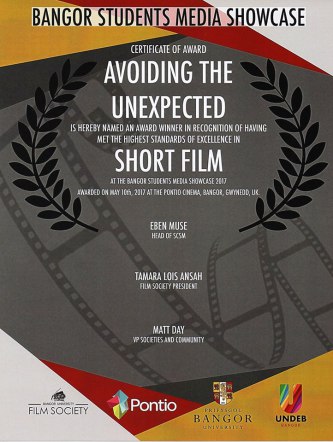 Filmed on one day on location at Bangor University.

Ideally we would have had a more inspirational location, as it was we had to 'make do' with what was available in the short time frame that we had.

The film was made for a competition, it failed to make the top five. The successful selections were all comedic, which obviously ours isn't.

However, it proved popular at the media showcase, stunning the audience into a few seconds of silence before the applause. In our opinion this reaction was indiicative of the message being successfully executed.